Some 2 200 acres of the Valley contain trees of various types.  Hard to believe, but the fact is that in 1953 when the estate was purchased by the current owner, the area containing trees was no more than three acres of conifers and a few acres of degraded ancient woodland.

This area grew from three to 1600 acres over the 1950’s and 60’s, when in keeping with the times, large parts were planted with crops of softwoods (predominantly sitka and scots and lodgepole pine).  These were established primarily as a cash crop and are coming to maturity for felling at the moment, and are an important source of income due to the present strong demand for timber.  After felling, some of these areas are being restocked with similar species, which will hopefully support the finances of the estate for the next generation, as well as providing an environment for species such as red squirrels and goshawks.  In some parts this restocking is taking place through natural regeneration by taking advantage of the seeds produced by the felled trees.

As these mature softwoods are harvested, on environmentally sensitive or remote parts of the estate the commercial softwoods are being replaced with what might be called ‘amenity’ trees.  This species mix tends to contain hardwoods such as birch, rowan, hazel and oak, and it is hoped that these might one day produce a scrub-type environment whilst protecting the open heather moorland, which is very valuable from both ecological and landscape perspectives.  Once a dominant land use in the area, this scrub is currently the rarest use classification in the Northumberland National Park, and it is hoped that the estate can play its part in reversing this decline.  ‘Amenity’ trees now occupy well over 50% of the Valley’s afforested area, which today totals some 2 200 acres.  The best part of the Valley to observe these efforts is probably just to the west of Mounthooly. 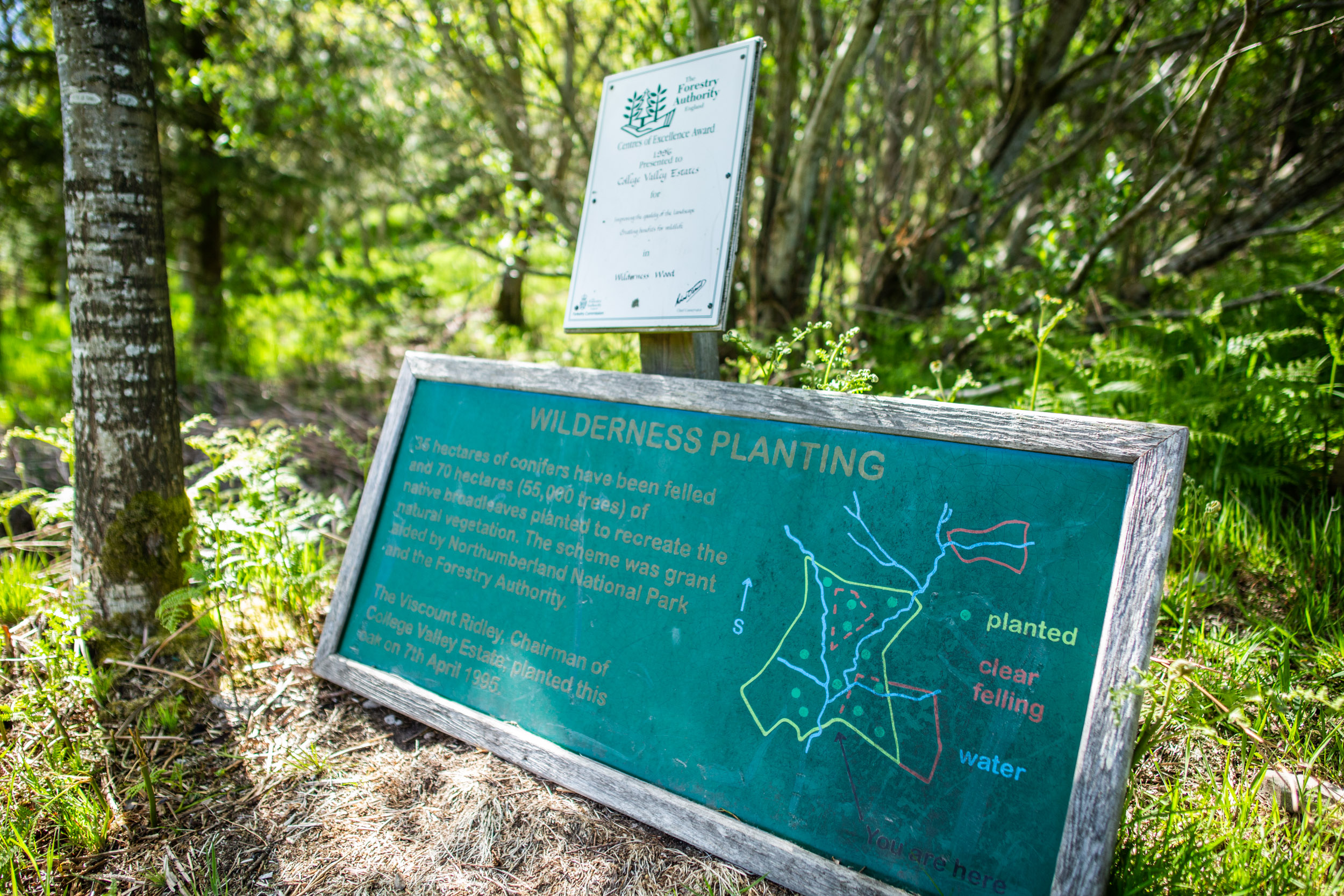 Visitors to the Valley cannot fail to notice that much of the banks of the streams are now covered in gorse, an unusual plant that can flower in any month of the year.  The estate was hit by devastating floods in 2008 and 09, and it is hoped that this vigorous plant will help stabilise the banks in case of future flooding, and also help reduce downstream damage.  Furthermore, it is now well understood that trees and scrub beside streams support insect life which is in turn vital for the health of many species in the streams.  A much smaller proportion of the Valley’s banks are now grazed with stock than was the case just a few decades ago, and it is possible that the amount of grazed banks will reduce further in the future with judicious planting.

A final part of the Valley’s tree assets are rare areas of relict ancient woodland, containing trees such as veteran alder.  Some of these can be found opposite Whitehall and north of Goldscleugh, and these are carefully managed to support their survival.

Softwood harvesting operations take place in the spring and summer months of both years.  The harvesting machines can be mesmerising to watch, but please do not do this other than from a safe distance of several hundred meters and please obey all warning signs.  The harvesting equipment is extremely heavy, and often operates on slippery and steep surfaces, and requires a considerable safety distance.  The lorries which each carry up to 30 tonnes of harvested timber away are operated by some of the most skilled drivers in the UK because they operate in such extreme conditions: if you meet them on the road please be patient as they work in this difficult environment. 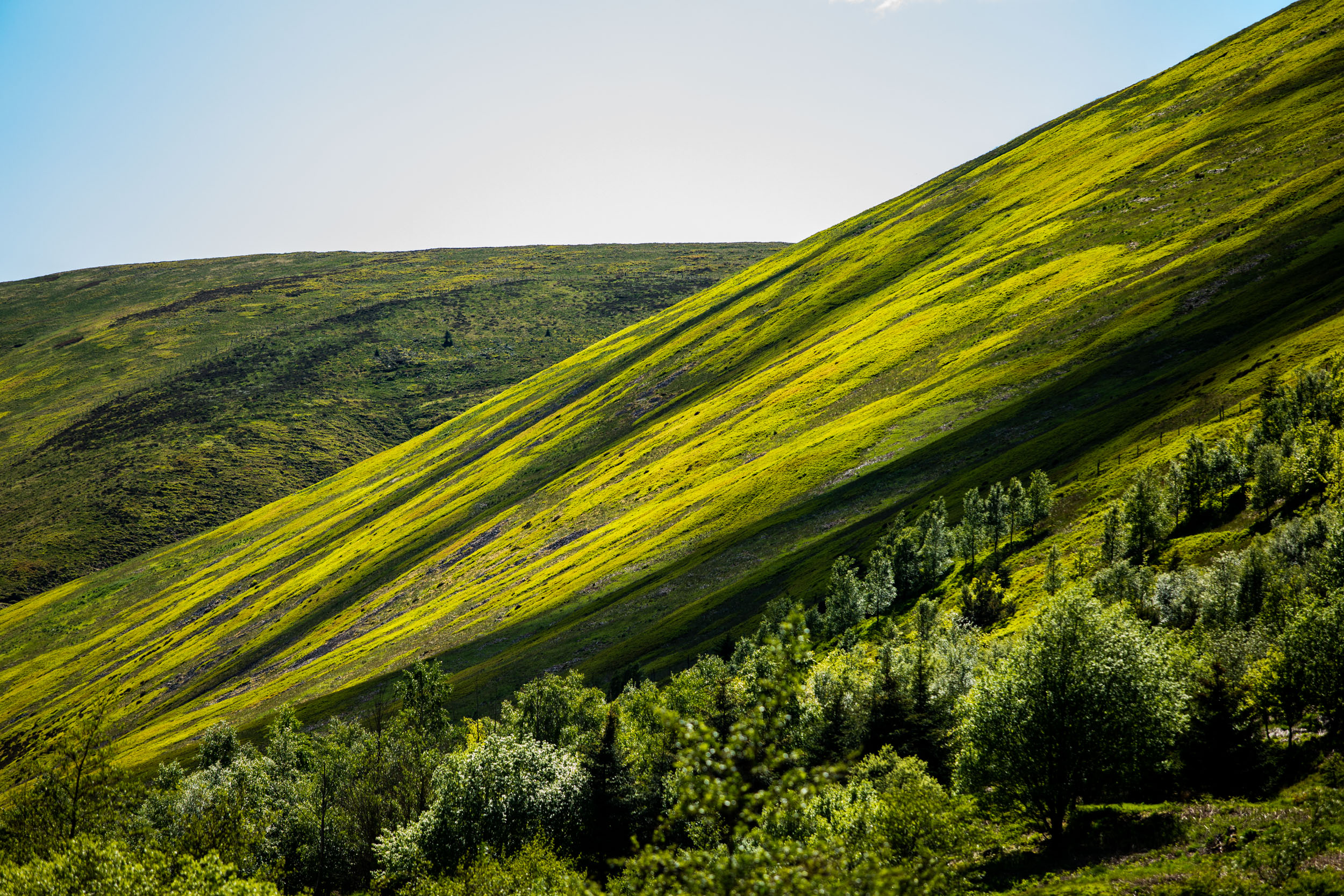 A rich and diverse history, stretching back over thousands of years.